"Quick, let's untie them before more gnolls show up. If any are down in the dungeon my illusion may have alerted them..." Amadar hurries over to the poles and cuts Jalath and Amadar free of their ties. Jalath is in a very bad shape so she casts a healing spell on him to get him back on his feet.

"I came to rescue Jalath. I did not know the gnolls had more captives. Who are you?" Amadar asks Ulafiel. 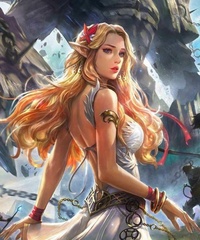 Ulafiel shakes off the rope as its cut from the pole, and stands up, looking around at the new faces and grimacing a bit at the corpses that now littered the area.

"Um, my name is Ulafiel-" she stops herself by clearing her throat with a few coughs. "Just Ulafiel. Thank you for the rescue." She gives them a soft smile.

The blue-haired young man cocks a smile and zips over in a rush of blue miasma. "Heh, no problem! You looked like you were in trouble. Actually, we might all be if we stick around too long," he gives a shrug. "I'm Suraj. This's Amadar," he gestures to the ranger, "aaaand you're welcome for the rescue. Amadar, should we get outta here already?" Suraj looks to her as he sizes up present company, to see if he can expedite any retreat if necessary.

"Wait, hold on! We can't leave yet!" Ulafiel exclaims quickly. "There's still someone further into the ruins. I can't just leave them in there, and... well, would you be willing to help them?"

"Wait, there's someone else down there?" Suraj's mood is quickly serious. "'Course I'm willing. Do you know how far down they are?"

"No," Ulafiel replies somewhat meekly. "They went down awhile ago, and they haven't come back out. But I don't think they killed them. At least, I hope they didn't..." She mumbles that last part under her breath. 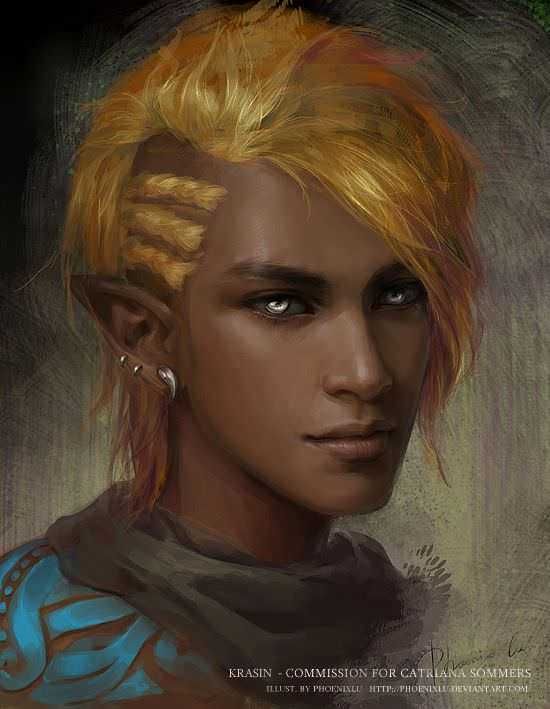 Amadar Durue: "By Kesellion, we shall attempt to help your friend, Ulafiel. Jalath you stay here. If we haven't returned in an hour, try to make your way to Kavanast on your own. You are not in a shape to follow us down into whatever awaits beneath Dyn Ardas..." Amadar turns towards the entrance to the dungeon beneath Dyn Ardas and gives her scimitars a spin. "Let us head down there, then."

"Yes, agreed." Ulafiel nods her agreement as she steps behind Amadar. "They've already been down there so long, I'm honestly quite worried. Let's not waste any time!"

Just as Ulafiel has said this, five gnolls come running up the stairs from the dungeon beneath, snarling, grunting and barking, armed with spears and shields. They must've been alerted and drawn by the illusionary roar Amadar cast as a distraction.

"Heh! No need; looks like they came right to us!" Suraj just has a cocky smile as he once again assumes a combat stance.

Amadar quickly made short of one of the gnolls with her deadly scimitar work. The beast yelped in pain as it went down.

Suraj steels himself and takes a breath, knowing his supply of energy is low. But this may warrant digging deep and spending what he has. He revs up, crouching slightly as his body is overcome with misty blue vapour, and shoots forth to the middle of the group of gnolls -- and he becomes barely visible as he reappears in the middle of the bunch, and as he suddenly appears, a concussive burst of force tears the very air asunder right in the middle of the group. In its epicentre, Suraj stands up in a combat stance, clearly a little winded from the sudden burst of supersonic speed.

"Yeah?! C'mon, step it up!" he taunts the rest of them. Of course, the sound of the burst of air rumbles and travels wide, audible out to 300ft, easily. He once more pushes through the tiredness and zips forth to deliver a solid double-kick to an unlucky gnoll that escaped the worst of the blast. 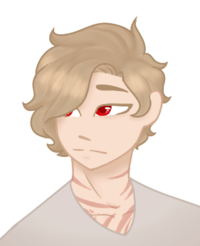 Hearing the loud sound, Ymeria quickly finds where it comes from, standing at the bottom of the stairs they look up. "Hey there, more trouble is coming, could any of you help me get out of these manacles? I can't really cast spells like this." They say as they run up the stairs. Nervously looking behind themselves, looking for what they knew was about to come.

Ulafiel sees the gnolls approaching and feels herself stiffen. Of course, now that they didn't have the element of surprise, this would be a much different story. Ulafiel opened her book, acting as her arcane focus and her life's work, as she poured her heart and soul into every word she had written into it. Including the spells she had learned on her travels. As she readied to cast the spell, two had already fallen, and she had just the spell for the job.

Her fingers twitched as she drew the shape in the air, and four bright blue darts appear over her head in an arc.

"Magic Missile!" She calls out, thrusting the small darts forward, one digging into each foe, but one of the foes taking two as well.

"Hey, you must be the one we were going down to look for. I'm Amadar. Here, let me help you with those." With a quick and precise slash of her magical scimitar, Amdar cuts open Ymeria's manacles.

"Hey! Nice ta meet, name's Suraj, we'll do introductions later, if you can fight, start blasting!" Suraj calls out, waves cheerily before he jets off to the next gnoll in a rush of blue-glowing wind, and attacks twice with whirling, leaping kicks. Sadly, it seems the next gnoll was ready for him, meeting his advance and evading the whirling blows.

Only, that itself was just a setup for a longer chain of blows -- as Suraj drops low, sweeps his leg around in a low kick that knocks the gnoll into the air, which is then followed up by a quick flip and a downward punch to knock the creature into the ground again.

Ymeria, seeing their hands free, grips their rapier and dashes towards one of the remaining gnolls. Right before they come close they vanish in a blur, and end up standing on the other side. Their weapon covered in blood, and the gnoll behind them falls to the floor.

To say Suraj is impressed is an understatement as he looks over and witnesses the dizzying display of speed and prowess -- enough to momentarily draw his full attention. "Ohhh, boy, I like this one. I really like 'em. Wow," he gives a breathless smirk before he recomposes himself and readies himself for the melee to continue.

The last one left, barely clinging on to life. One might normally feel a sense of anger or a drive for vengeance at seeing their captor like this. But Ulafiel wasn't one to hold a grudge, and all she could feel for this last gnoll was pity. Still, she couldn't let it continue on and potentially hurt someone else down the line. She had to end it here and now. Ulafiel closed her eyes as she chanted again while manipulating her fingers to summon three of the small magical darts again.

Sending them forward, one dart lands firmly in the gnoll's knee, dropping it down, but only until the second one shoots into its shoulder, and the final one lands square in the center of its head, sending it toppling to the ground as it breathes its final breath.

Amadar yells out to the group: "More gnolls are coming. And a barghest, it would seem. We should probably run!" A lot of gnolls are hurrying towards the stairs from deeper in the dungeon, and among them is a hulking, blue, wolf-like beast with goblinoid features, walking on its hindlegs.

"Uhhhhhhh. Wow, he's a big guy," Suraj cocks his head, and blinks, shaking off the confusion and the tiredness of the fight. He then looks around to present company, and his eyes focus on Ulafiel, and he nods meaningfully.

"Hey, Ulafiel, I'm gonna pick you up and run as fast as I can outta here. Are you ready?" he asks, before preparing to do precisely that.

Quest Resolution:
The party escapes to the city of Kavanast, leaving Aglinagrast and his gnolls behind in Dyn Ardas. Except for Amadar who returns to Quel'Essir in Brevos, the other adventurers decide to remain together as a party and after a couple of months they find themselves in Vistageth, being hired by House Arcrow to track down Markus Arcrow.


>> You each obtain 1125 xp, 125 from the combat with the gnolls and 1000 from having rescued the captives or having escaped captivity. Suraj also obtains 1500 Silver Dinari (gp) as the remainder of his payment for having helped Amadar save the captives.<<