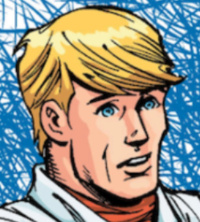 Personality: Happy-go-lucky, a little gullible and unexpecting of anger. Slow to conflict with civilized folk, fast to sell you more food than you can pay for.

Goal: To find rare and mythical beasts, slay them and taste them. To protect honest citizens and to feed them amazing cuisine. To see all of life's grandeurs.

After being sold to an esoteric order of mythical beast hunters and warlocks, being transformed into a Blood Hunter, Cyrus quickly rose through the initiate ranks until he was given more freedom among his order. He used that freedom to leave his homeland and venture to the Korvast continent in hopes of finding new and strange creatures he could slay, cook and book into recipes.